Trans fat is widely known as being one of the worst dietary fats. Created in processing to solidify oils, trans fat raises LDL (bad) cholesterol and lowers your HDL (good) levels. This can increase your risk of heart disease and stroke. But now, researchers have found yet another reason you should rid your diet of trans fat. 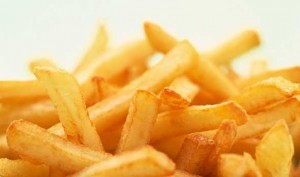 Researchers at Oregon Health & Science University discovered a link between those who consume diets high in trans fat and brain health. The tests showed that people who ate more trans fat were more likely to have brain shrinkage, and they scored lower on tests dealing with thinking and memory. This result was compared to people who ate a diet low in trans fats and high in vitamins.

This study analyzed nutrients in the blood to assess the effects of diet on the brain. Those who had more vitamin B, C, D, and E in their blood were shown to do better on memory and thinking tests, as opposed to those with more trans fat in their blood.

Brain shrinkage is common in Alzheimer’s, which affects approximately 5.4 Americans. While scientist shave not figured out just what exactly causes Alzheimer’s, this and other research suggests that eating a healthy diet which is high in fruits and vegetables may protect the brain and make it work better.

Trans fat can be found in processed foods such as margarine, cakes and other baked goods, as well as in fried foods. While grocery shopping, check the label for trans fat or “partially hydrogenated oil” in the ingredients. While it is probably impossible to totally eliminate trans fat from your diet, aim for consuming them as little as possible to ensure you live a healthier life.