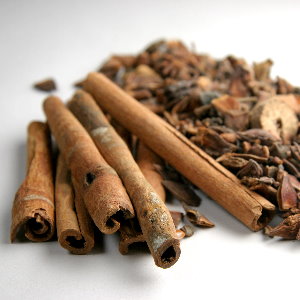 [1]I don’t know about you, but there’s not much that can beat a hot bowl of oatmeal with brown sugar and cinnamon! It may not seem like a match for the hot weather, but cinnamon can be just the right flavor to get me going. Cinnamon is my 8 year-old daughter’s favorite spice. She adds it to everything from her smoothies to ice cream.

Cinnamon is also one of nature’s remedies, benefiting us beyond sweetening our palates. Musician Bret Michaels talked about how cinnamon has been shown to be beneficial to those suffering from diabetes on the most recent episode of The Celebrity Apprentice. Studies over the last several years have shown that cinnamon consumption may lower blood glucose, LDL cholesterol levels and triglycerides. Getting a whiff of its strong scent is a quick way to give your cognitive senses a boost since the cinnamon scent may improve brain function. Cinnamon was included in my 7 Super Spices blog [2].

Even for those who don’t have diabetes, cinnamon is more than just a delicious add-in. Here are some of my favorite ways to use cinnamon:

What are your favorite recipes using cinnamon?