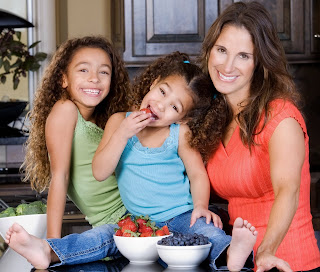 Today’s blog post is not about nutrition or health but instead about an overwhelming amount of joy and hope I feel as I watched the inauguration. Personally, it’s been an emotional day for me as the mother of two bi-racial daughters. Over 11 years ago, the day before my wedding in Topeka, Kansas I was asked to go to a therapy session with my mother. Yes, I had to go visit a shrink the day before my wedding to make sure I knew I was ruining my future. It was in this session that I was told how my life ahead would be very tough because I was about to marry a black man and I was making a huge mistake. I was told I would not be able to get a good job. I was told I would not be able to buy a home. I was told that certain people would not associate with me because of the color of my husband’s skin and that my children would be treated differently. It certainly helped that we had already lived in San Francisco two years and would continue living there for 5 years following our wedding. Since I believe San Francisco is the most diverse city in our country I never really felt uncomfortable with my inter-racial relationship and marriage in the beautiful City by the Bay. Fortunately, I also didn’t believe the words that I was told the day before my wedding and I’m happy to report I’ve done okay so far with owning my own business, owning a nice home and having wonderful friends throughout the country.

But for me, today is more about the children of this country. As I sat watching Oprah a few years ago when she shared a revealing documentary by a 17 year-old black student who was doing a “doll test” to recreate the research from the 1950’s about both black and white children associating different qualities of each doll based on skin color. The black doll was associated as more ugly and not as smart and the white doll as more attractive, nice and smarter. I was astounded so I decided to do my own test with my daughters. Sure enough, they confirmed the study findings. So what did I do? As a nutrition and health researcher I immediately got on the internet and bought three books on Amazon that I thought would be good for the girls. All of them had a black mom and a white father but I thought they could see someone who looks like them since I couldn’t find any with a white mom and black dad. I began reading these books to my daughter frequently and showing them pictures. Close to that time, my oldest daughter wanted a Barbie cake for her birthday so I made sure to ask the cake lady to buy a Barbie with brown skin. During my daughter’s birthday party one of her closest little friends said “that’s not a real Barbie!”. I was horrified but understood that the little girl wasn’t trying to be mean she just never sees brown-skinned Barbies. I am also a believer in positive self affirmation for my children and started to have them repeat after me, “I have beautiful brown skin”, “I am beautiful on the inside”, and “I can be whatever I want to be when I grow up” and they usually add a few more. I figure if they hear it from me and say it to themselves enough times they will believe it.

Now, my girls, as well as black and white children throughout the country can realize that with hard work and determination anything is possible in the United States of America. As I have frequently caught my 7 year-old watching Sasha and Malia Obama intently on the tv, I smile to myself. I am so grateful that now they will not only hear from me how they can do and be anything but they can also see it and understand that we are all so very blessed and lucky to live in the best country in the world!

By the way, all of my family now loves my husband dearly and prior to my mother’s death from cancer she said he was the best son-in-law. Sometimes it just takes time for people to understand that we are really more alike than different. And thanks to all the K-State ADPi sorority sisters who always supported me in my relationship even when I had my own doubts about it at the beginning.

Also, if you want to see the documentary click here [2].

Peace and love to all,
Mitzi